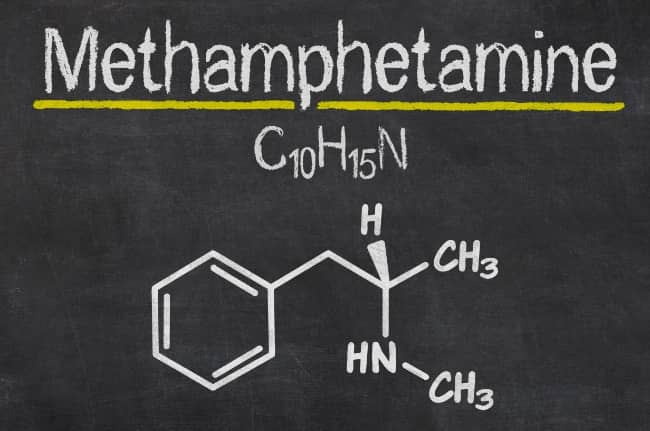 Methamphetamines belong to the stimulant class and it is known to be addictive and toxic with serious side effects. Methamphetamine was developed in the early 20th century to act as a nasal decongester and bronchial inhaler. Just as its parent compound, amphetamine, it can cause an increase in activity, talkativeness, and decrease in appetite, and a sense of pleasurable well-being or a state of euphoria. They easily disintegrate into liquid or alcohol when stirred. It is often snorted (taking small doses) or injected, but can also be taken orally in the form of a pill or powder (1).

Methamphetamines act as a neurotransmitter. They work by changing the levels of certain brain chemicals such as dopamine, norepinephrine, and epinephrine, which influence mood, energy, and sexual function. Like other neurotransmitters, the level of dopamine and other neurotransmitters depends on how much of the drug is consumed, duration of use, and the type of drug. People who abuse methamphetamines can experience euphoria, feelings of being “high,” extreme alertness, and increased energy; however, if too much of this drug is ingested, it can cause dangerous side effects on the brain such as hallucinations, paranoia, severe depression, agitation, memory loss, slurred speech, cramps, and memory loss (2)(2a).

The most common route of intake for methamphetamines is an injection or snorting it. In addition, the drug can be purchased from illegal drugs vendors and just as crack cocaine or heroin. As with all illicit drugs, there are possible side effects of using methamphetamine. These side effects can range from mild to severe and include but are not limited to: hyperactivity, hallucinations, shakes, tremors, jitters, agitation, profuse sweating, diarrhea, heart palpitations, sexual excitement, depression, anxiety, irritability, and feelings of detachment (3).

Stimulant abuse has many common symptoms. Most notably, users will exhibit extreme excitement, often leading to uncontrollable physical actions. Another sign of abuse is that users will experience restlessness, irritability, and extreme levels of mental confusion. Methamphetamines can cause the central nervous system to become highly stimulated which can lead to seizures and respiratory failure. When taken in excess, methamphetamines can cause death from asphyxiation and toxic build-up in the blood.

Methamphetamines, Speed, and cocaine are highly addictive substances. Because of this, they should not be used for long periods of time without consulting your doctor first. If you decide to use them, use the utmost caution because these drugs can be very dangerous. Methamphetamines can cause sleeplessness, impaired judgment, impaired reflexes, and severe hypertension. If you begin to feel like you cannot stop using the drug, seek professional assistance right away (4).

When it comes to common drug combinations, Methamphetamines and cocaine almost always produce a negative combination. However, some studies have shown that combining methamphetamines with alcohol can increase the effect. When this occurs, one should be very careful. Alcohol can easily alter brain chemistry and can increase the intensity of feelings experienced by the user.

Besides causing a physical dependency, methamphetamines can also cause a psychological addiction. This comes from how the drug provides a powerful stimulant while also creating a state of relaxation. As a result, users will frequently feel restless and irritable. They may also have a hard time sleeping and will be easily distracted. People who are highly addicted to methamphetamines may experience symptoms such as nausea, vomiting, anxiety, paranoia, and heart palpitations. If someone has been abusing methamphetamine for quite a while, they may even experience depression.

If you are a person who is abusing crystal meth, you should seek help. It is very dangerous and can lead to serious health complications. You can go to local hospitals and clinics to get in treatment. Treatment centers can also help with your physical and mental health problems and teach you how to stay away from substance abuse in general. You can visit the National Methadone Maintenance Program websites for more information.

Note; These compounds are not for human consumption.